In the wake of the flooding in Houston and its surroundings, we watched with pride as people of all walks of life came together to support each other.  However, at the same time, we saw the world order slip a little closer to chaos.

This last week, North Korea continued its destabilization efforts by launching a missile over Japan and testing a hydrogen bomb that was ten times stronger than the Hiroshima bomb.  So strong in fact, the detonation caused a magnitude 6.30 earthquake [i].

Much of what is being reported in mainstream media looks chaotic, with free-styled responses and seemingly implausible threats from both the North Korean’s and the United States Government.  To the contrary, in my opinion, this is all quite predictable and expected.

Unless we are willing to decide that South Korean lives are less important than American lives, there doesn’t appear to be reasonable military options.  The proximity of North Korea’s conventional weapons relative to Seoul (South Korea) is likely to make any military options a mass casualty event for South Korea [ii]. 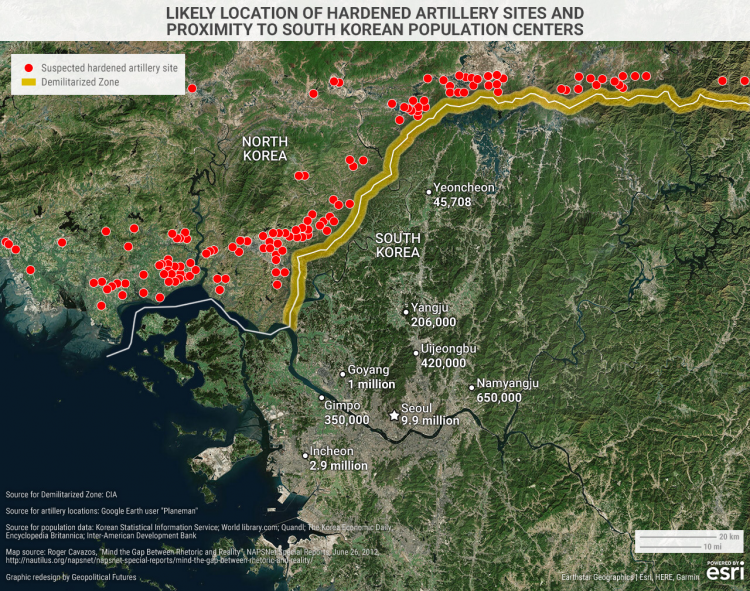 It seems like the only viable option for the United States and our regional partners is to run a “Cold War” style, Reagan/Gorbachev “Break-the-Bank” strategy. Back then, the U.S. economy was simply able to sustain the extraordinary defense spending burden longer than the Soviet economy [iii].  This contributed significantly to the ending of the Cold War and the downfall of Communist Russia.  I believe this is the very tactic that the United States is using now on North Korea.

In fact, let’s look at the defense spending breakdown by country.  North Korea spends the equivalent of $7.5 billion USD per year on defense [iv], which equates to roughly 26.31 percent of their annual GDP [v].  Not only do the total dollars spent on defense by the United States exceed that of North Korea’s by 78x, U.S. defense spending only equates to 3.16 percent of our annual 2016 GDP [vi]. 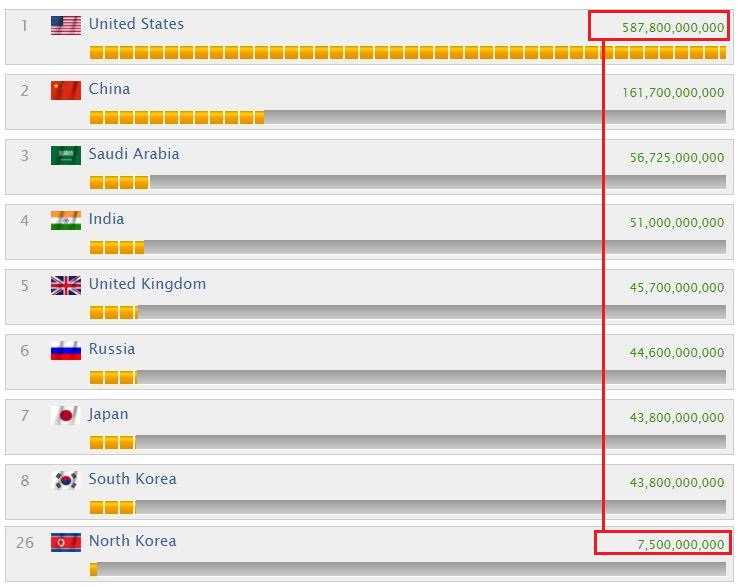 Looking at the GDP of North Korea, their 2016 equivalent in USD was $28.5 billion [v].   Defense spending alone in the United States exceeds the whole country’s GDP by 20x [iv], not to mention 2016 GDP in the United States was roughly $18.6 trillion – a staggering difference in the size our two countries to say the least [vi].

The cost for North Korea to maintain their conventional weapons – which includes 20,000 artillery pieces, 1,000 short- and medium-range missiles, 70 submarines, more than 400 patrol/missile boats, and 563 combat aircraft,  not to mention the 1.2 million infantry men, – equals approximately $7.5 billion USD. This amount of money does not seem like an adequate amount to keep a force like that in a constant state of preparedness [vii].

However, based on the rate of progress North Korea has made with a nuclear deterrent, we don’t seem to be bringing them to their knees quick enough.  In my opinion, if we don’t shrink their demand for spending quick enough, through military expenditures, we’ll need to shrink their supply of money via economic sanctions. 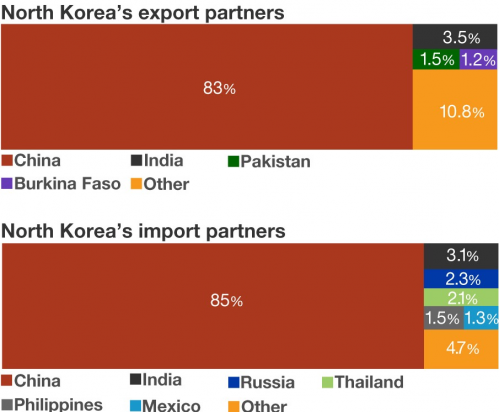 As you can see, North Korea relies heavily on China for both their exports as well as imports [ix].  Much of what they export to China are raw materials in the form of coal briquettes [ix].  Yet, I doubt the Chinese are too dependent on North Korea for their Sunday afternoon BBQ’s. 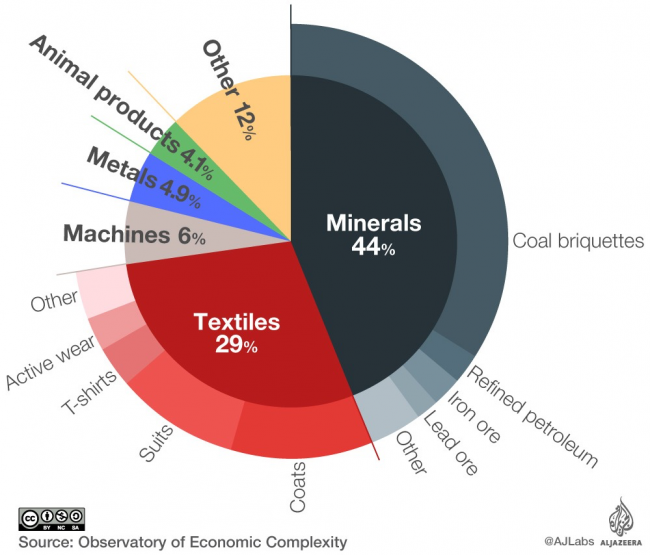 Since China joined the recent United Nations trade sanctions, they recently asked the United States to suspend military exercise with South Korea in demonstrating our military preparedness to North Korea [x].  In other words, the Chinese appear to want us to stop forcing the North Korean’s to continue spending money they don’t have on their military preparedness.

In fact, the response from President Trump was clear when he tweeted a complete trade embargo against all countries doing business with North Korea was an option.

Needless to say, it’s not likely that the United States will sanction China with a full import ban on their goods and services. And it’s not likely that China would risk losing the U.S. as a trading partner over keeping their trading relationship with North Korea.  That would mean China would give up roughly $480 billion per year in exports to the United States [xi] for approximately $3 billion from North Korea [xii].  Logically speaking, the math simply doesn’t make sense.

With the conclusion of the latest round of military exercises in South Korea, the imbalance of power should likely return to a stable state and we will hopefully continue to see an increased pace of military spending by North Korea fueled by our increased missile defense measures being installed in South Korea (we wrote about these systems earlier in the year here).

Economic warfare is risky and can often lead to actual war.  However, if we can keep North Korea spending the money they don’t have, China will likely not want to risk their political stability causing this fire to burnout before it spreads further. With that said, with the anniversary of the creation of North Korea approaching on September 9th, I wouldn’t put it past North Koreans to shake the chaos meter once more [xii].

For investors, the growing uncertainty is palpable and a flight to safe assets like gold and U.S. Treasuries will likely to continue.