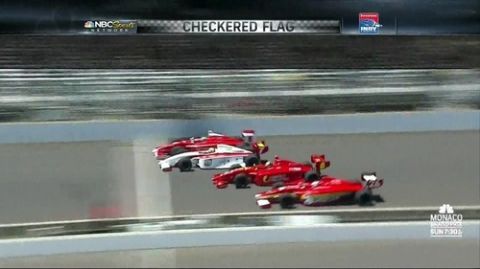 As earnings season winds down, it appears we had an excellent outcome. 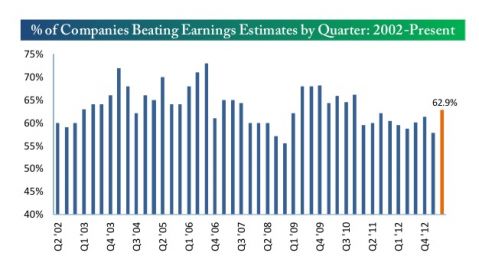 Roughly 63% of companies beat their earnings estimates, and earnings grew by 2.1% in the quarter.[i] These were some of the best numbers we have seen since 2010. It also appears there is continued rotation into stocks from bonds as we are seeing the price to earnings multiple on the S&P 500 expand from 12.70 on January 2012 to 16.30 today. [ii]

With the good news of earnings behind us, the next big hurdle markets participants will focus on is the upcoming political circus around our fiscal house.

Three things in Congress are colliding around the same time:

1) The debt ceiling will need to be extended by October or November, according to the CBO [iii], or we will be in risk of default—not very good for our credit rating.

2) The 2014 Federal Budget needs to be completed by October 1st. Congress comes back on September 9th, giving them only 3 weeks to avoid a government shutdown[iv].

3) The next round of sequestration cuts will take place 15 days after Congress adjourns at the end of the year, impacting fiscal year 2014. The cuts amount to another $76 billion, or about 1/3rd of 1% of GDP.[v] Almost everyone in the political class agrees the sequestration process is damaging critical functions and there needs to be a better budget cutting process.

The last time we experienced these three events was: 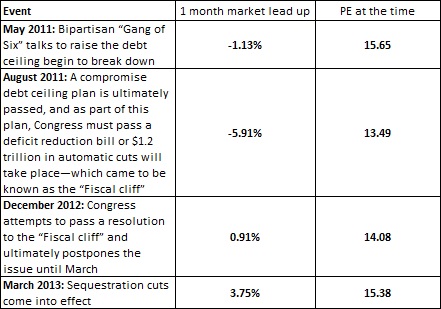 We should expect similar volatility as we approach the upcoming fiscal trifecta. My guess is Congress will likely use the Continuing Resolution process to push all three of these issues until the first of the year and align them all around the sequestration cuts. This will put the political class in a box with a massive fiscal crisis looming and the hopes that a compromise will occur.

The average PE during those prior four fiscal events was 14.65. With expanded PE's now, our markets are trading on 13.5% more speculation than in prior crises, only adding to the drama. Add to this the notion that the Fed could begin to withdraw, or at least slow the rate of their bond purchases as early as September, and you can begin to see the excitement building (sarcasm).

I hope we can all enjoy a quiet next couple of weeks of summer. The fall circus is about to begin, and it might not be peaceful.