It simply amazes me how much we have to talk about government fiscal policy and the market moving forces it creates. Just as a recap, the list of the times the US Government has been in a fiscal debate during these last two years is astonishing:

-December 2010: The Simpson-Bowles Deficit Reduction Committee report is released; the report is ultimately largely ignored
-May 2011: Bipartisan “Gang of Six” talks to raise debt ceiling begin to break down
-July 2011: The House passes a plan to raise the debt ceiling and reduce deficit; plan is immediately tabled in the Senate
-August 2011: A compromise debt ceiling plan is ultimately passed, and as part of this plan, Congress must pass a deficit reduction bill or $1.2 trillion in automatic cuts will take place—which came to be known as the “Fiscal cliff”
-December 2012: Congress attempts to pass a resolution to the “Fiscal cliff”, and ultimately postpones the issue until March

It’s no wonder why corporations are sitting on cash. Here are some stats on cash positions at major companies:

What's ironic is the President is asking Congress for $1 billion dollars for innovation programs recently. That figure is just 8/10ths of 1 percent of General Electric’s cash and short term investments.

How about this: the political class should create some stability in governmental fiscal and tax policy, and then perhaps GE and others will spend some of their massive cash stockpiles on innovation. The best part is corporations need no congressional silliness to do this.

The sequestration in its current form will require cuts of $1.2 trillion over 10 years, split evenly between domestic discretionary spending and defense, according to CNN’s article “CNN Explains Sequestration” on February 19. This would be $120 billion per year. To put this number in perspective, US GDP from the Q4 Bureau of Economic Analysis report on January 30 was $15.8 billion.

A cut of $120 billion would cut US GDP by 0.75%, which is significant when we already had negative GDP growth for last quarter (discussed in our blog two weeks ago).

I regrettably am handicapping sequestration as a 60% reality. Here's why based upon some basic facts:

Fact 1: Most Republicans are sitting on very safe seats. Nate Silver, the noted handicapper of political races, wrote a December 27 article in the New York Times titled, “As Swing Districts Dwindle, Can a Divided House Stand?” In it, he wrote that there are only 35 swing seats—down from 103 in 1992.

Fact 2: Gerrymandering has created a very Republican bias in the House, and that is driven by the rural nature of their constituents. While there were more votes for Democratic congressmen, they were mostly wasted votes in urban population centers. Essentially, Democrats had lots of turnout in their fewer congressional seats vs. Republicans that had less turnout but in more seats.

The table below from the Washington Post shows this trend in actual bias with and without incumbency. 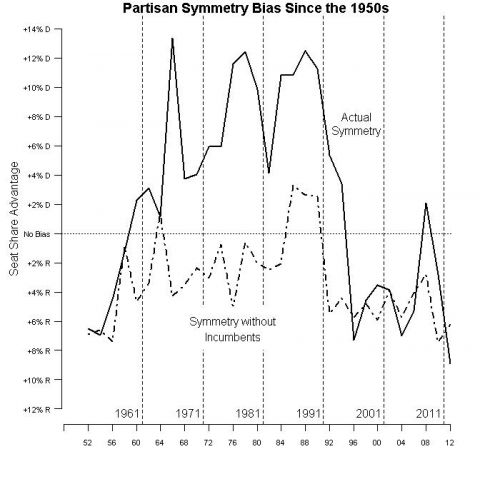 Fact 3: The most recent proposed solution to the sequestration cuts suggest a split between cutting spending by $55 billion and raising taxes by $55 billion, according to a recent plan titled the “American Family Economic Protection Act.”

Deduction 1: Republicans in safe seats cannot vote for more spending and higher taxes. It's not in their DNA, and they are certainly afraid of a primary challenge to their seat. Basically, it's not in their incentive to do so.

Deduction 2: If Republican's give on taxes now, they will not have anything to negotiate with on tax rate reform later in the year. The President will have gotten more taxes and a little less spending, leaving Republicans scratching for something to negotiate a flatter tax system with.

Deduction 3: There is little time to negotiate a major tax rate overhaul in this round leaving them with only two choices; sequestration cuts go through or they kick the can again.

So what to do with your money

The first thing is to realize the anticipated impact on GDP from the cuts will be -0.75%. Second, and this is critical, GDP and stock market performance are not highly correlated, which we wrote about previously. Finally, these cuts will have very little impact on emerging markets and developed economies outside the US.

I would suggest keeping a well-diversified portfolio with a decent exposure to global markets. I would not run for the exit on most fixed income, with the exception of longer-term TIPS and US Treasuries. In either sequestration scenario detailed above, a mild recession could be in the offering.

Most importantly, continue to examine your need for funds from a timing perspective and be clear about the volatility you would face in your allocation during that time. From there you can make some very educated decisions. We would welcome the opportunity to run this analysis for you and I think it's the most important data point you can have.