Normally, I wouldn’t choose to write about politics, considering our clients span a wide range of viewpoints. However, that’s also what makes our business so engaging and rewarding.

But, as we shift the narrative from a monetarily controlled world (interest rates and central banks), to one that is potentially dictated by fiscal policy (taxes, spending, and government interventions), the political economy is a natural intersection that ought to be examined.

Let’s set the stage by looking at stock market valuations.  Not many would disagree that valuations are at very high levels.  In fact, by looking at the chart of the 12-month forward price-to-earnings ratio, you can see that we’re at levels we haven’t seen for more than a decade.  [i] 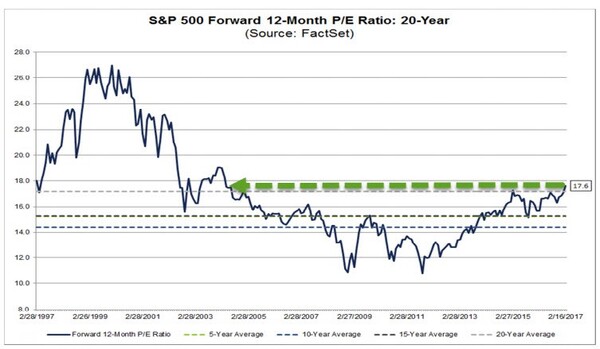 Now, some may attribute the rise in valuations to the recent election of Donald Trump.  The media seems to have latched onto this idea by calling it the “Trump Rally.”  I happen to have a different perspective.

Around the time President Trump was elected, we were emerging from a six-quarter earnings recession that started in Q4 2014 and continued until Q3 2016.  During this period, we did not see any earnings growth in S&P 500 companies. [i] 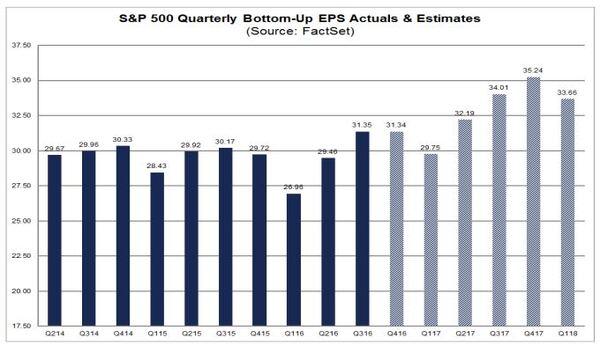 It’s important to understand that markets do indeed react to positive earnings growth.  That trend continues today with Q4 2016 posting EPS growth of 4.6%. [i] 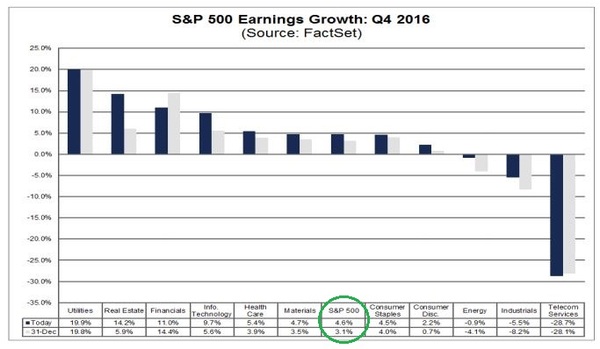 We should also look at President Trump’s overall approval ratings.  Based on a study and data collected by Gallup, Trump’s approval ratings are the lowest of any president. [ii] 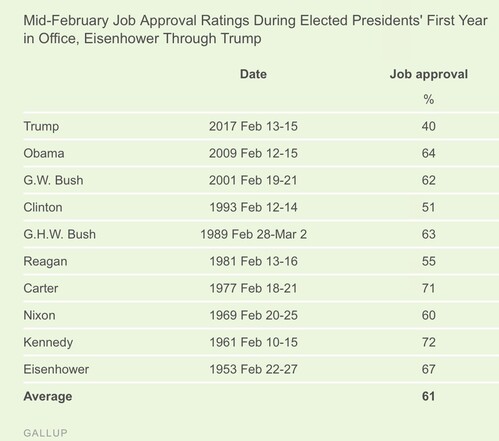 In fact, based on a Pew Research Center study, President Trump scores poorly across most metrics compared to recent presidents. Specifically, he scores poorly on the following topics:  Communication, trustworthiness, the ability to get things done, and being well-informed. [iii] 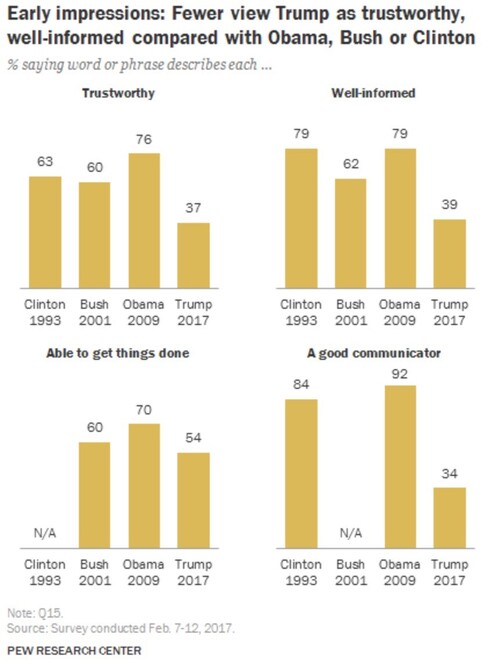 Furthermore, there is evidence to suggest that he might be the most polarizing president that this country has seen in awhile. Another study by the Pew Research Center shows that while Trump has hearty GOP backing, he has almost no crossover support. [iv] 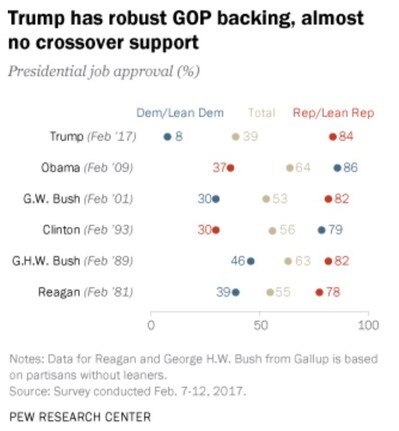 However, the more critical measurements that would likely impact the markets, as well as the economy, stems from investors’ consensus views and expectations.[iii] 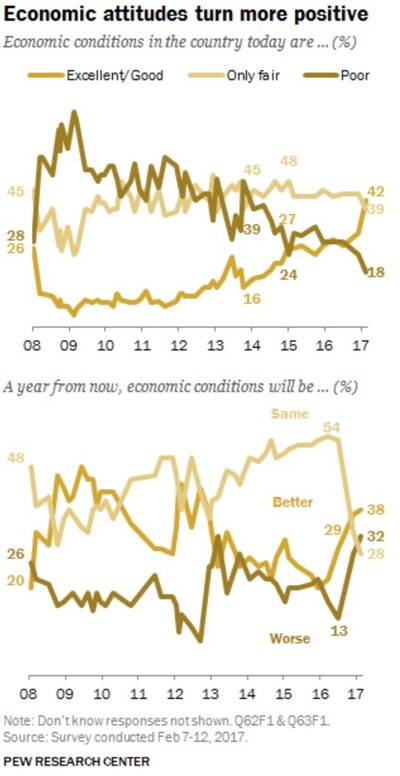 On Economic Attitudes, Trump looks very strong.  Both the attitudes about today’s conditions, and the expectations for a year from now, have noticeably improved since Trump was elected.  Maybe we can call this the “Trump Expectation Rally.”

And therein lies the problem. Expectations may be running too high for Trump’s fiscal policy proposals, which are listed below.

On top of all of this, Republicans have a historic chance to take up to 60 seats in the Senate; a large number of Democratic seats will be up for grabs in 2018. [v] 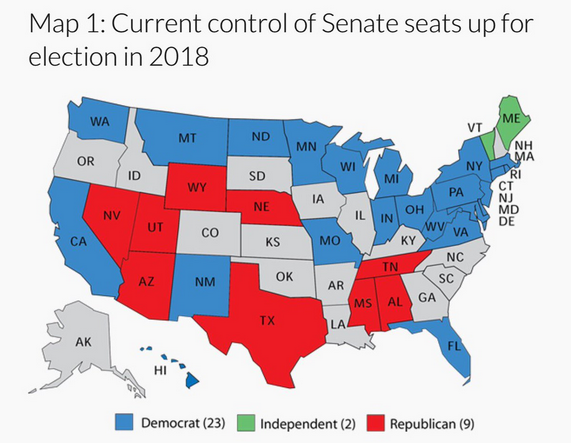 If Senate Republicans play their cards right, with candidates supporting a strong president or denying a weak president, they may be able to pick up some of the Senate seats in Trump victory states such as Wisconsin, Michigan, Ohio, Pennsylvania, and Florida.

My opinion is that we have a president who is losing favorability ratings, has near-zero crossover support from Democrats, is being denied cabinet selections by some of his Republican senators, and is having his own party’s senators turning away from his immigration policy. Juxtapose that against markets at all-time highs and the belief from investors that fiscal policy will take over for monetary policy, and we have quite an interesting quagmire, if you ask me.

Be that as it may, earnings expectations for 2017 are forecasted to grow by 10%, which may be partially fueled by expectations of corporate tax cuts, repatriation of profits, and the repeal and replacement of Obamacare. [i] 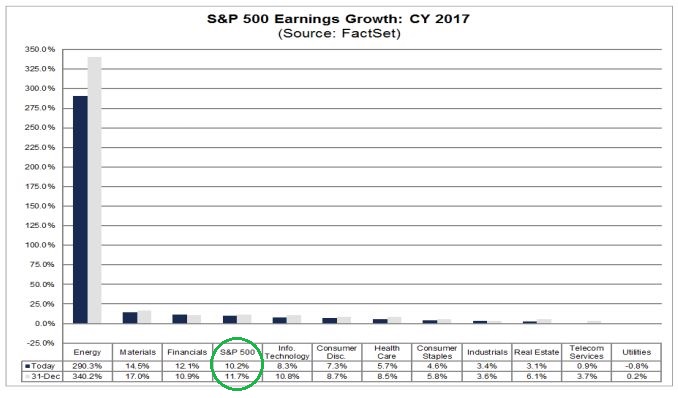 I suspect that the “Great Deal Maker” Donald Trump may want to start making some deals with his own party soon, because we are all banking on a shift towards Fiscal Policy.

If Trump gets “Lame Duck” status before he even gets to the starting line, disappointments – as well as a slew of other problems – are likely to be awaiting investors.  Because of that, we’re rooting for our success, which is tied to Trump’s success with fiscal policy.

If you have questions or comments, please let us know.  We always appreciate your feedback. You can get in touch with us via Twitter, Facebook, or you can email me directly. For additional information, please visit our website.