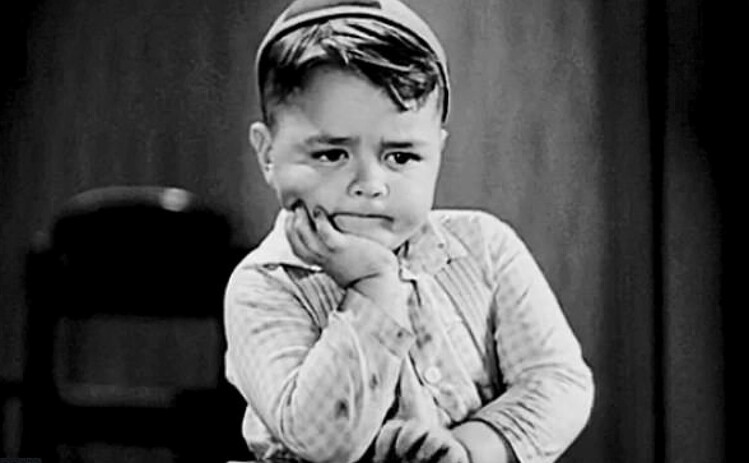 Last week, our post analyzed the possibility that the Federal Reserve would make adjustments to its language suggesting that patience is still required when discussing cutting interest rates, due to weakening economic data.  [i]

As predicted, the Fed did exactly that, removing the language regarding its previously more patient tone. Comparing the Federal Reserve’s official statements between March and May, we can see its approach transition. Earlier in the year, the tone was patient but more recently took a more assertive outlook toward cutting rates in the coming months.

Here is the comparison between the two official statements released by the Federal Reserve. [ii] 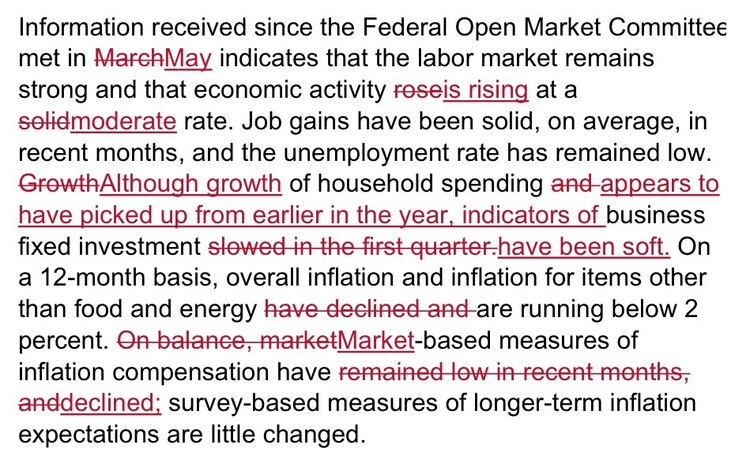 You can see the changes clearly suggest the inflation component of its mandate is running below target especially with respect to compensation-based inflation.

Again, comparing the Fed’s March statement to May, you can see its removal of “patient” from its language:

“In light of global economic and financial developments and muted inflation pressures, the Committee will be patient as it determines what future adjustments to the target range for the federal funds rate may be appropriate to support these outcomes.”

“The Committee will closely monitor the implications of incoming information for the economic outlook and will act as appropriate to sustain the expansion, with a strong labor market and inflation near its symmetric 2 percent objective."

The bottom line is wage inflation is not rearing its ugly head in light of such a low unemployment figure. [iii]

Historic unemployment data shows that the current rates in the U.S. economy have reached a monumental low that has not been experienced since the 1970s. Over the last 40 years, the unemployment rate has not been below 4%; this changed for the first time in 2018. As a result, these numbers would seem to suggest that wage inflation would be an issue.

However, Federal Reserve Board Vice Chairman Richard Clarida has been advancing an interesting concept around wage inflation. He summarizes his thinking in the chart below. [iv] 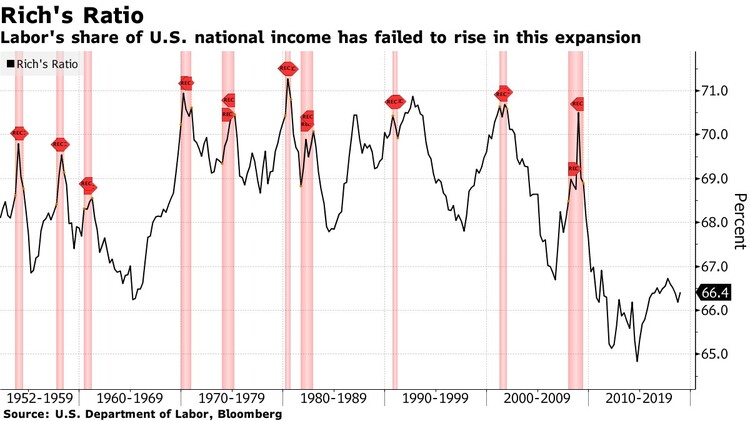 Some refer to this as the wage gap or wage disparity. We know this has been in a progressive albeit modest decline since 1980 only to accelerate in 2009. The decline seen in 2009 is thanks in part to the financial crisis that disrupted the U.S economy as a whole. Since then, the labor’s share of national income has struggled to recover from the crash.

With companies taking a greater share of income from labor and increasing profit margins, there is likely more room for wages to rise without seeing prospective price increases immediately.

The dynamic is simultaneously bothering the Fed, while also allowing them to lower rates in the coming months. Having this proposition puts a fairly large time stamp on any attempt to revert back to how things were prior to the Great Recession.

This would consist of a years-long process of above-trend wage growth just to return back to 2009 levels. Just look at the various wage growth levels with the predicted time it could take, according to the Economic Policy Institute. [v] 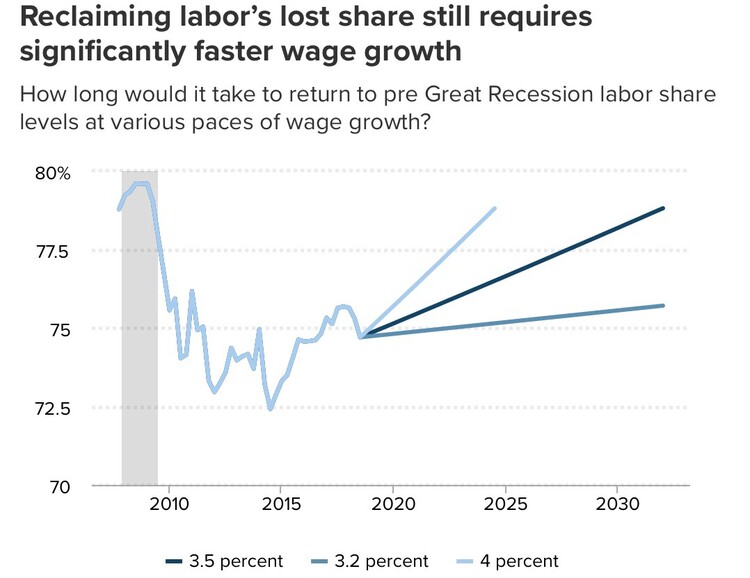 The question to all of us is, what’s prohibiting labor from fighting back against corporations?  The answer is complex, but it might just be the fact that the cost of capital is cheaper than the cost of labor. Lower interest rates make capital expenditures on technology and business efficiencies cheaper than adding more employees.

Our thesis is that lower rates for a longer portion of time may be the new normal following a period of rate hikes. Extending duration and focusing on positively growing cash flows and emerging markets may all be areas to take advantage of the “lower for longer” interest rate phenomenon.