It's official: the threat of massive cuts in spending with the fiscal cliff created a contraction in our economy. According to the Financial Times, GDP as reported this last week contracted by 0.1%, which is a drop from positive growth of 3.1% in Q3 to a drop in Q4.

Much of the drop resulted from a contraction in defense spending, which dropped by 22% or 1.3% of GDP, according to reports in the Financial Times and the Washington Post. The Defense Department foretold steps they would have to take in preparation for sequestration, even if it were delayed. As early as February 2012, Defense Secretary Leon Panetta asked Congress to undo sequestration, saying, “There is very little margin for error in this budget.” Defense contractor Lockheed Martin announced layoffs in September, citing declining military spending as one of the reasons.

More recently, Ashton Carter, the Deputy Secretary of Defense, stated in a memo to the Department of Defense on January 10, 2013:

“The possibility of sequestration occurring as late as the beginning of the sixth month of the fiscal year creates significant additional uncertainty for the management of the Departments…I therefore authorize all Defense Components to begin implementing measures that will help mitigate our budget execution risks.”

The memo went on to outline hiring freezes, cuts in the Defense Department’s civilian workforce, and other measures.

It's critical to realize nothing actually happened from a policy standpoint. There were no mandatory cuts or congressional action–just simply the threat of massive cuts, which caused the Defense Department to scale back in preparation. 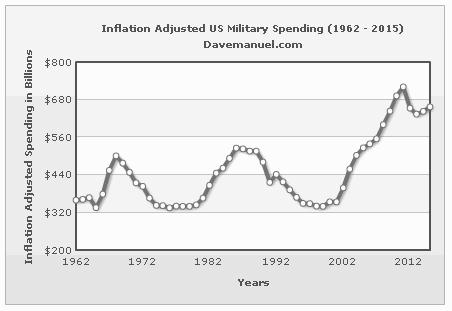 Today, it's an entirely different story. While consumer spending expanded by 1.52% of GDP, it's not enough to help offset such a major impact on Defense. We simply didn’t grow our economy fast enough to take massive cut's in any one component of GDP. 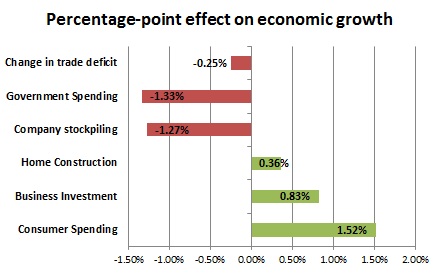 Consider Q4 2012 to be Policy Error I. Regrettably, we still face Policy Error II. The "Political Class" kicked the can on sequestration until March 1. If we have a repeat of Q4 2012, that would be two quarters of contraction. That would be the official definition of a recession.

Market participants are clearly forecasting a resolution to this problem, as the S&P 500 is trading near all-time highs. Let's hope they are right. A 2% GDP growth economy is not enough to offset massive immediate cuts in consumption, government spending or business investment. I would keep your foot on the gas and the brakes at the same time with your portfolio. Don't give up on your fixed income allocations.