It's apparent we are facing $85 billion in cuts to government spending. As I mentioned in last week’s blog, there appears to be too wide of a gap for an immediate political solution.

So, can our economy sustain and grow without as much government? If you listen to the President we are facing dire consequences if these cuts come to fruition:

“Once these cuts take effect, thousands of teachers and educators will be laid off, and tens of thousands of parents will have to scramble to find child care for their kids. Air traffic controllers and airport security will see cutbacks, causing delays across the country.” –President Obama, weekly radio address, according to Real Clear Politics on February 23.

There is no question that many people who work in government or within its food chain will certainly feel some pain.

Putting the cuts in perspective

However dire the cuts might sound, these cuts are immensely survivable by our economy. In fact, if we look at the period following WW2 when the government was withdrawing massive amounts of spending we see an entirely different picture.

A September 2012 paper by Cecil Bohanon from Ball State University found that in 1944, the US Government was about 55% of GDP, and by 1947, government shrank to a more normal 16% of GDP. This was a reduction of government spending by 75%. On the other hand, consumption rose by 22%, private investment rose by 223%, and housing exploded by 600%. 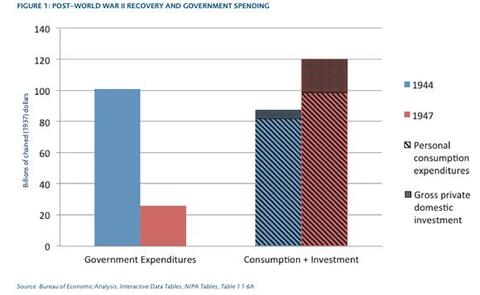 Similar to today's rhetoric, some very smart people predicted some doom and gloom. According to Bohanon’s paper, Gunnar Myrdal, who later became a Nobel Prize winner, forecasted an “epidemic of violence" by the amount of spending being withdrawn by the government after the war. Oops! 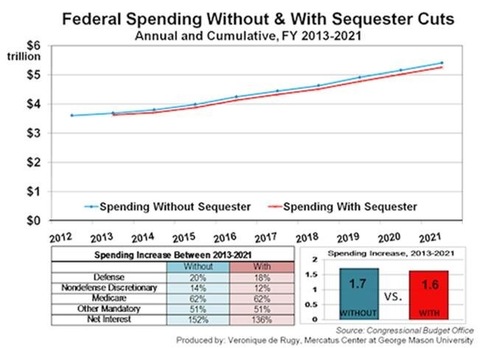 Needless to say, we are not facing a human consumption explosion similar to that in 1947. However, we really don't need one either. We are talking about $85 billion in cuts, which is only 0.53% of today’s GDP of $15,829 billion.

When you look at consumer savings, they are sitting on massive amounts of cash—and have been adding to it. 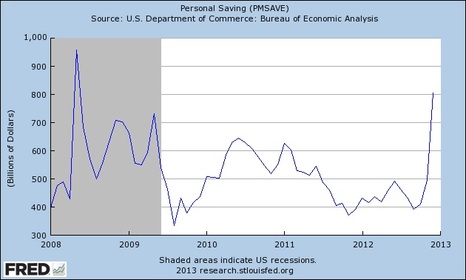 The Federal Reserve reports that personal savings as of December was $805.2 billion, which is an increase of $412.3 billion since September. FactSet also reports that non-financial S&P 500 companies are holding on to $1.23 trillion of cash. Suffice to say, between households and corporations, there is a very large amount of cash on hand that can be spent.

While it might be time to brace for the impact of a policy induced recession, it might also be necessary to continue to keep our tilts toward growth. Consumers might just surprise expectations and make up for what policy makers can’t: spending.

Will the cuts be hurtful? Sure. Is it as apocalyptic as the headlines suggest? Far from it.