It's clear that Thanksgiving dinner could barely wrap up as the shopping began. Stores opened as early as 8 PM on Thursday to get a jump on the most important tradition Americans share: consumption!

CNN reported that shopping was up 9 percent on Black Friday alone and up 13 percent over the whole four-day weekend compared to last year. Also, they reported that Internet sales were up 26 percent over last year and set a new record by breaking above $1 billion. Clearly, the US consumer doesn’t seem swayed by the uncertainty around the threat of higher taxes.

I had a fulsome discussion with Jon Talisman, a leading expert on tax policy from the Washington DC based Capitol Tax Partners. It might be helpful to consider the impact on consumption from some of his thoughts. After all, 70%+ of our economy is based upon our willingness to shop.

As you can see from his bio, he has clearly spent time with those that are in control of the outcomes on taxes in the coming years. Here is a link to our first in a series of 4 conversations that will take place over the next several weeks, in MP3 format. 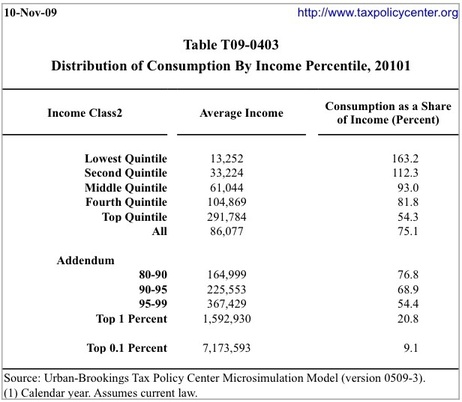 For our purposes, it's not necessary to calculate which quintile consumes the most in aggregate dollars, but rather to examine the income impact for those in each quintile based upon some proposed tax scenarios.

First, let's look on the chart below at the income impact from an idea to cap overall deductions to $50,000. 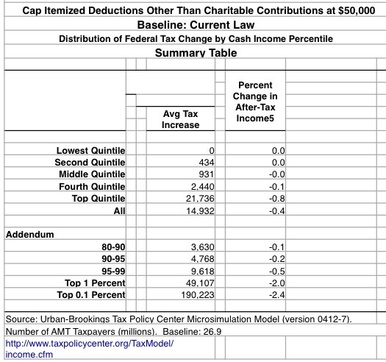 For those in the lowest quintiles, the tax impact is negligible. For those earning, $100,000 the impact is still negligible. While the impact on the top quintile is more pronounced at almost a 1% drop in after tax income (that's about $21,000 in additional taxes that won't go to their consumption), this is also a group that only consumes about 54% of their incomes—not a small amount, but not enough to drop us off a consumption cliff either.

Here is a chart giving a look at the projected impact of a tighter cap of $25,000 on itemized deductions. Again, there is nothing that suggests a shut down the great American tradition on spending and consumption. 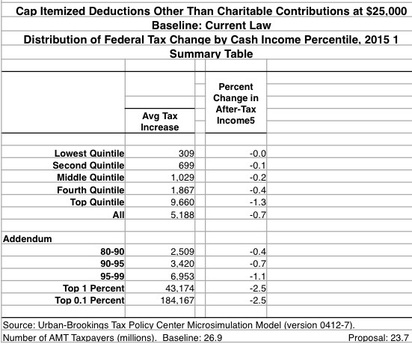 Given the fear in the market, if the ultimate solution is a cap on deductions, we could see an upside surprise to low expectations on consumption. The hard data suggests we just wouldn't see the impacts being talked about under that scenario. Don't get me wrong: no one wants to pay higher taxes and I'm not supporting that as a position. I'm simply trying to determine if we will fall off a consumption cliff if certain tax measures are implemented.

Based upon income levels associated with consumption and tax increases, it doesn't appear to pose a threat to our American tradition.

However, if we do not have a definitive agreement and we were to fall off the fiscal slope, consumption would indeed take a hit. When you consider all that is going to expire—the Social Security payroll tax cut, the lower income tax rates from the Bush tax cuts, the lower tax rates on dividends, the “patch” on the Alternative Minimum Tax—you can see how consumption would be impacted across the board.

Below is a graph showing the percentage change in federal tax rates if everything in the fiscal cliff hits. 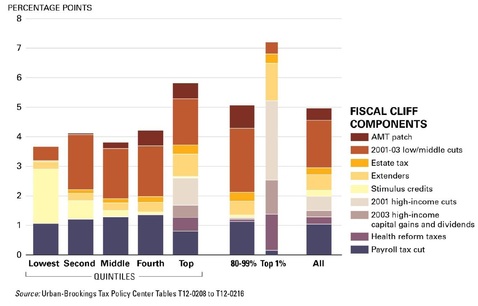 It's clear that policy makers know what is at stake. If they implement a cap on deductions or something similar, we wouldn’t get a major negative shock on consumption. If we get no agreement and taxes go up on everyone, then there will be pain felt across the spectrum. The problem with playing chicken on policy is the small chance of something big and bad happening.

What investors can do:

While the fiscal cliff seems scary enough, it's really the consumption cliff that we need to avoid.