It’s Never Quite What You Expect! 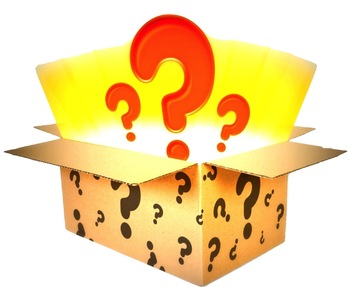 It may come as a surprise to those who don’t follow the ups and downs of the stock market on a regular basis, but since the Federal Reserve raised the Federal funds rate three times since December 2015, long-term interest rates have dropped.

That’s right – what was expected to be a catalyst for rising rates has actually been exactly the opposite: lower long-term interest rates.  You can see this drop in long-term rates (blue line/scale on left) starting in December 2014 and a simultaneous rise in short-term rates (red line/scale on right), which the Federal Reserve is driving [i].

We have often talked about the ending of the monetary policy narrative, which has driven earnings growth and equity price appreciation since 2009.   Since the Trump election, the Federal Reserve has strongly signaled that a fiscal policy narrative would slowly replace the Fed’s long and dominant position in managing the U.S. economy's money supply.  Regardless of your position on how the Fed has handled the last eight years, you have to give them some credit.  Just look at all that went into tackling the global financial crisis [ii].

What’s happening now appears to involve a healthy dose of skepticism over the direction and probability of a fiscal policy narrative taking over.  As a result, investors seem to be piling back into long-term fixed income as this skepticism builds [iii]. 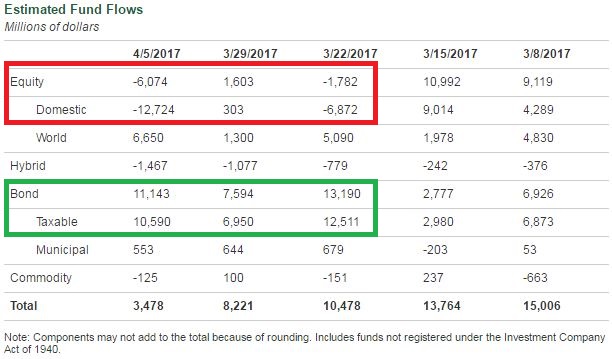 We know the fiscal narrative has driven some speculation in equity prices and that a reasonable correction (5% - 10%) is a likely outcome every year [iv].  As I have alluded in past commentaries and our Q2 2017 Look Ahead, this could likely be the case, as the fiscal narrative looks likely to fail [v], particularly considering some of the speculative expansion in prices versus earnings per share growth [vi].

One of the reasons Phillips & Company is expanding our focus on emerging markets is that emerging market returns have been driven by earnings growth more so than multiple expansion (speculation).

Furthermore, we have officially kicked off the earnings season for Q1 2017, and it’s expected to be one of the strongest in years.  Across the board, S&P 500 companies are expected to grow by 9.2% [vii].  Additionally, companies with larger exposure to sales in foreign markets are expected to see a staggering 15.7% growth in their EPS [vii]. 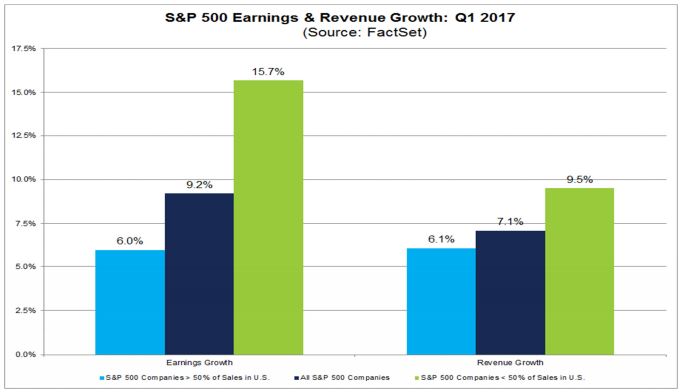 So what does this all mean?

Declining long-term interest rates in the wake of rising short-term rates juxtaposed against a wavering fiscal policy narrative prove that markets are rarely what you expect.  Most investors have elevated concerns and expect the worst.  However, if earnings matter, fearful expectations may be well overblown in the short run.

It’s never quite what we expect!